What is the Meaning of the Saint Christopher Medal? by Maureen Pinney

The Catholic Church honors medals as a form of religious protection. These medals often represent one of our many beloved saints, one of which is of Saint Christopher. The Saint Christopher Medal is one of the most popular around the world because of his significance in the Catholic faith.

The Saint Christopher medal is believed to protect the wearer on his or her travels. For this reason, many people wear Saint Christopher pendants around their necks, on their wrists, and some even hang the medals in their cars!

Who is Saint Christopher?

While some scholars debate his true existence, we can agree that the legend of Saint Christopher represents something truly amazing. To this day, he is revered as one of the Fourteen Holy Helpers.

Saint Christopher, originally known as Offerus or Reprobus, was born to a heathen king and his wife. Reprobus grew to become a strong, seven-foot tall man who vowed to serve only the most powerful. Reprobus eventually discovered that the king was not as brave as he claimed, and therefore set out to discover his own true calling.

He stumbled upon a hermit, who advised him in the ways of Christ and baptized him. Reprobus changed his name to Christopher and pledged his allegiance to God. To best serve Him, Christopher promised to carry those who needed help across a dangerous stream. One day he carried a child across the river who, upon reaching the other side, revealed himself as Christ.

As proof that Christopher had just carried Christ, the child ordered Christopher to drive his staff into the ground. Upon returning the next day, Christopher's staff had grown into a tree full of fruit. While this incidence appealed to many people, it angered the king. Christopher was imprisoned and eventually beheaded. A martyr for his kind and honest efforts. 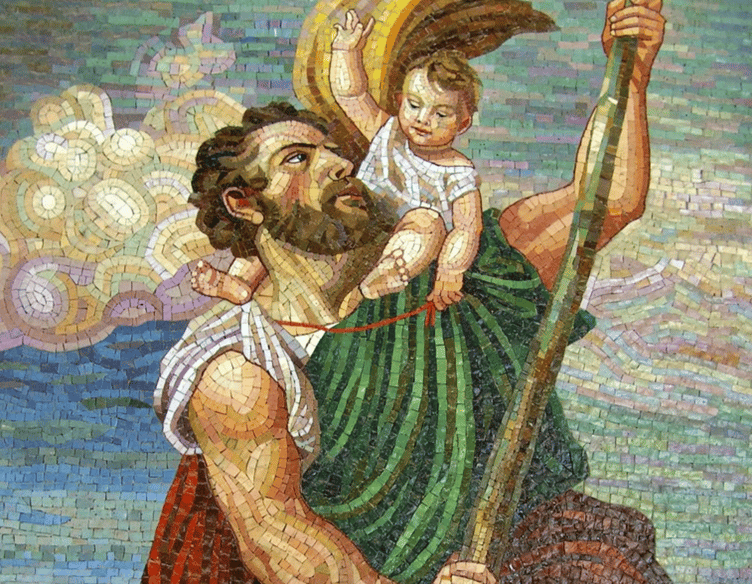 What does Saint Christopher protect you from?

In addition to being the patron saint of travelers, Saint Christopher is believed to protect people from epilepsy, lightning, storms, pestilence, and floods. Many soldiers also pay tribute to Saint Christopher by wearing his medal or carrying a prayer card with them. As one of the Fourteen Holy Helpers, this medal carries the promise of health and well-being.